With regard to evaluating the reliability of the evidence, however, a key question to ask is: how many houses were there in the town in 1853? Withers’ estimate is 10,000. So, even if this figure is on the high side, it is clear that the survey provides no details about sanitation provision in the great majority of the town’s houses. Nor does he give details about how the survey was compiled. Not only is the survey incomplete, but it may not be entirely accurate.

The types of investigation outlined above can all be carried using resources that are available online:

• For transcriptions of parish registers in Lancashire, visit the Lancashire Online Parish Clerks’ website at http://www.lan-opc.org.uk/.

• High quality images of Lancashire’s historic Ordnance survey maps at various scales, including the six inches to the mile series, can be viewed on the website of the National Library of Scotland at https://maps.nls.uk/.

• Visual images of Lancashire past can be seen, for example, in Lancashire County Council’s Red Rose Collections at https://redrosecollections.lancashire.gov.uk/index.php?WINID=1587992743205.

Online examples of local health reports for elsewhere in the country can be found by searching the Internet Archive website, typing in the search text context facility ‘Report to the General Board of Health on a Preliminary Enquiry into …’. In this way, comparative studies can be undertaken. 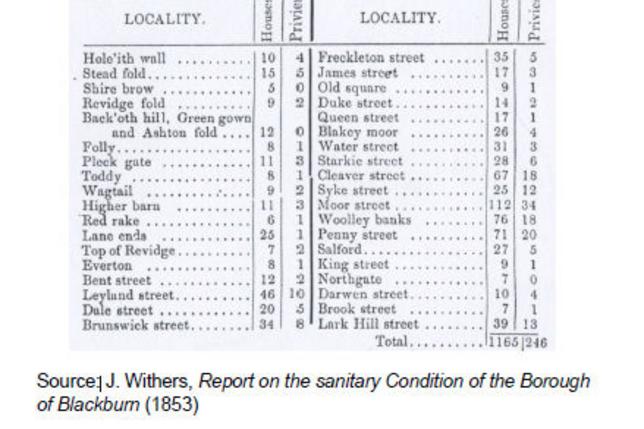 CHILDREN’S INVESTIGATIONS INTO LOCAL HISTORY: MAKING USE OF ONLINE SOURCES

Geoff Timmins shows that children can learn much, in terms of skills gained and knowledge acquired, from the study of local history

At a time when children have more limited schooling than usual, to suggest they have much to gain educationally from undertaking local history exercises may seem, to be polite, rather foolish. After all, local history is hardly a key component of learning and teaching in schools, even though it features amongst the National Curriculum requirements. Surely priority must be given to providing learning opportunities in subject areas that are seen to be more important, especially maths and English? Until more normal times emerge it could be argued that teaching other subjects, including the humanities, can be safely set aside.

Such arguments are too narrowly focused, however. In the first place, by carrying out investigations in local history children will certainly engage with English language work, since they will need to present their findings in written or spoken forms, or perhaps both. Making a written summary of elderly relatives’ comments about their school life provides an example. Secondly, opportunities also abound for children to apply basic numeracy skills. For instance, they might extract data from a local parish register to prepare frequency distributions of ages and supposed causes of death. Both are given in Anglican registers from 1813 onwards. Accurate counting and systematic recording of data would be required, perhaps with the totals being presented as percentages. As well, children might practice their ICT skills by displaying their findings as graphs, making use of spreadsheet facilities. Without doubt, studying local history can play a useful role in enhancing children’s language and numeracy skills.

But studying local history can also bring an opportunity to develop other, equally important intellectual skills. To the fore amongst them is that of interpreting evidence. Consider, for example, local Ordnance Survey maps, which became widely available during Victorian times. For Lancashire, they cover the entire county during the 1840s and again during the 1890s. Accordingly, children can use the two editions to discover the types of change that took place in their towns or villages between these dates. Did the numbers of mills and the rows of nearby houses increase, for example? They might consider where the mills were being built - mainly alongside canals or rivers - bearing in mind the need to obtain water for steam engines. They might judge whether the changes were small or large, perhaps listing features that stayed the same and others that changed; suggest why they were occurring – the growth of trade and industry, for example; and what impact that might have had on past generations, beneficial or otherwise. Smoke pollution from increased domestic and industrial coal burning, and road accidents from rising traffic levels are cases in point. That children are thinking about these matters and making reasonable suggestions rather than coming to definite conclusions is the key consideration. They are being required to think and to realise that historical interpretations are open to question. Historians have to learn to live with uncertainty!

In drawing conclusions about the changes taking place in local towns and villages during Victorian times, children can make use of the population totals available in each decennial census, starting in 1801. These statistics plainly give evidence about a further change that was occurring in their localities, as well as another source of evidence to help them assess the extent to which change occurred. In other words, using more than one type of primary source can help to strengthen historical interpretation. The opportunity for using census totals to engage further with numeracy is easy to appreciate.

Assessing the reliability of historical evidence is a further intellectual skill that can be developed. Looking for bias, incompleteness and inaccuracy enter into account. Consider visual images of localities, for example. Postcards showing towns in the past tend to focus on busy main streets. Also, sunny days prevail. A different and less favourable impression of a town would have been given if, say, a deserted main street on a gloomy and wet winter’s day had been shown. To take another and far less wholesome example, local public health reports dating from the early Victorian period tend to describe the worse examples of insanitary housing rather than providing a general survey.

Consider, for example, the table below, showing the number of houses and privies in different parts of Blackburn in 1852. Over a thousand houses were surveyed. The privies would probably have emptied into open cesspools, as large-scale maps of the period testify; they did not have water-closets at that time.

Several questions can be asked about the table, for example:
• how many people on average would have shared a privy, bearing in mind households would have averaged above five people, many being young children?
• how did this average vary between streets?
• how did people living in streets with no privies manage?