The variation in the design of handloom weavers’ cottages from region to region in Britain, and within regions, reflects both the nature of the yarns being woven and the varying domestic circumstances in which handloom weaving families found themselves. In term of achieving good natural lighting, upper-storey loom shops were preferred, and they were generally used for silk weaving, as at Spitalfields in London, Macclesfield in Cheshire and Leek in Staffordshire, and the weaving of woollens, as in West Yorkshire and the West Country. Cotton handloom weavers, who were strongly concentrated in parts of east and central Lancashire, required relatively high levels of humidity in their loom shops, which could be better achieved at cellar or ground floor level than in upper storeys. Avoiding direct outside access into loom shops and incorporating non-opening windows also helped to maintain loom shop humidity. Not all hand weaver’s cottages offered separate working and living space, a matter that impacted on both the comfort and privacy of those living in them. Moreover, working conditions within cottage loom shops varied considerably, with the damp and cold conditions occurring in many cellar loom shops scarcely being conducive to maintaining good health. 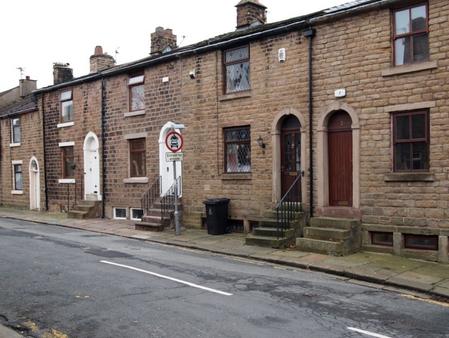 The cottages shown on the right are at Outlane, near Huddersfield, West Yorkshire. They are part of a row of mainly two-storied, stone-built dwellings, the upper stories of which were again used as loom hops. They have long ranges of mullioned windows running almost the entire length of the frontage, though some mullions have been removed in one of the cottages. Unlike the Macclesfield examples, no clear distinction between bedroom space and working space. Moreover, in the three-storied example, very good natural lighting for weaving could have been obtained in both upper stories. The cottages benefitted from quite long front gardens.

The appearance of surviving dwellings of this type have often been altered. In some cases, as with the example shown to the left, the original features can be easy to determine; it forms part of the row at Livesey, noted above. The lintels and sills show two blocked window openings, between which is a window that may have been deeper than the original. 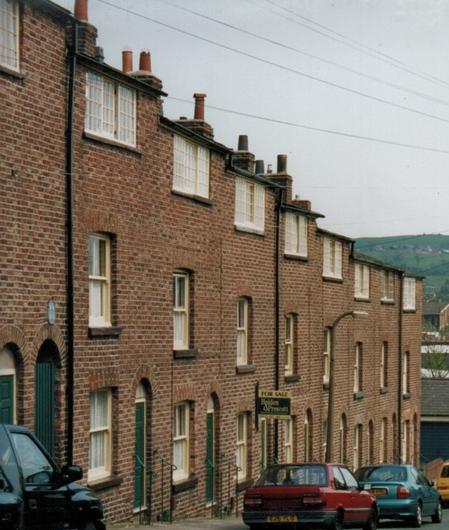 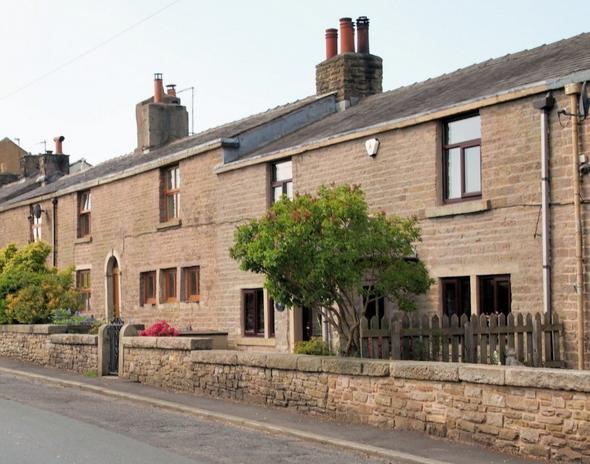 Loom shops in Lancashire’s weavers’ cottages were also commonly situated in cellars. The examples shown opposite are at West View Place, Blackburn. They comprise two-up, two-down dwellings that have a cellar beneath running from back to front. The cellars rise above ground level and have rows of windows with three lights at back and front. They may also have had cellar light wells in front of them, guarded by railings. The objective was to allow as much natural light as possible to enter the cellar for the weavers to work, thereby saving on the costs of artificial lighting, which may anyway have been inferior.

Two front and rear rooms were provided above the cellar, their doorways being reached by flights of steps, which could have posed dangers to the unwary and infirm. In common with the examples noted above, they are generally of plain appearance, though doorways with keystone arches are incorporated. The two-pot chimney stacks indicate that only two fireplaces were provided in each house; probably, they would have been in the two front rooms, with the cellar being unheated.

The account book compiled by James Brandwood, noted above, also contains a plan of a pair of cellar loom shops. The cellars are of similar in size to those at West View Place. They differ, however, in that they were lit by pairs of single windows rather than by rows of windows. There was space for four handlooms, one placed by the side of each window. Access was from inside the cottage via a dog-leg stairway. The weavers in these cellars would have had the comfort of an open fire.

That cellars were often favoured for handloom weaving in Lancashire is linked with the need to provide humid conditions for weaving vegetable fibres, cottons and linens, especially as far as the finer grades of cloth were concerned. Otherwise, frequent breakage of the threads could occur as the shuttle was passed through the warp threads in the loom. The warps were also sized – coated with a flour and water paste – to strengthen them. Higher levels of humidity could be obtained in cellar or ground floor rooms than in upper storey rooms. In contrast, animal fibres, silk and wool, could be satisfactorily woven in the upper storeys of cottages, in which natural lighting was less likely to be obstructed by any nearby buildings or natural features. 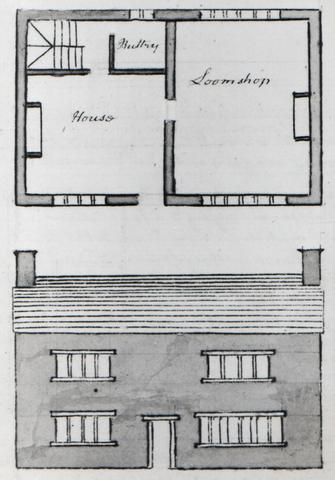 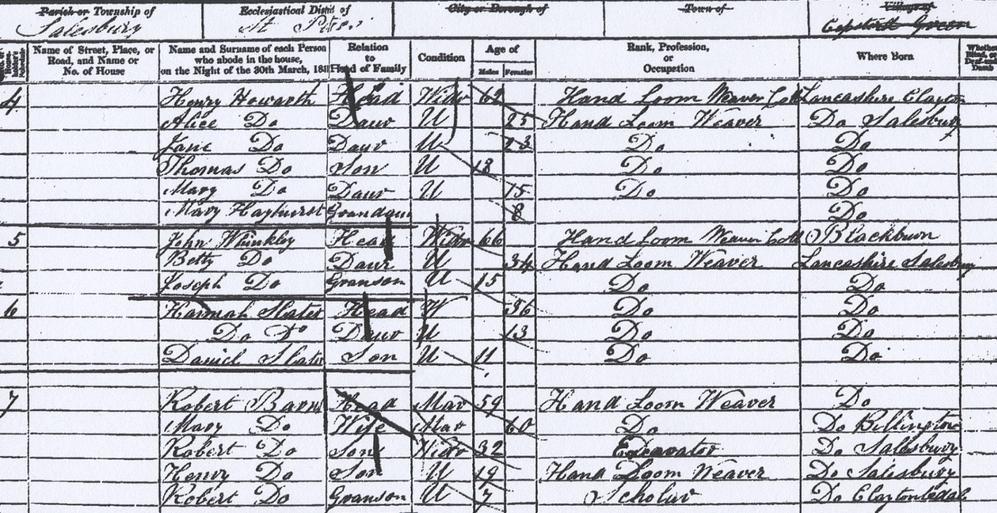 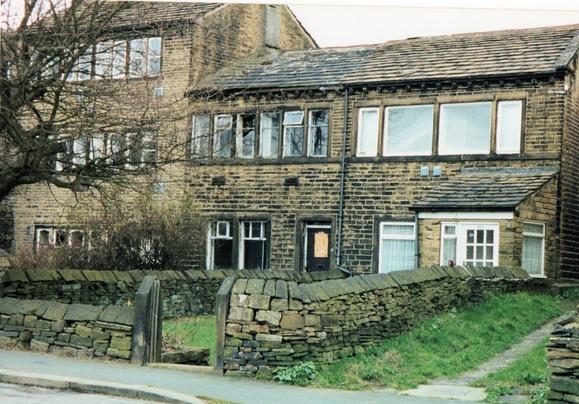 During the late eighteenth and early nineteenth centuries, tens of thousands of distinctive cottages specially designed for handloom weaving were built in   several parts of Britain, but especially in Lancashire. They added considerably to the development of the built environment in urban and rural areas alike. Most urban examples have been demolished, but considerable numbers have survived in rural areas. They are not always easy to identify, however, because of alterations made to them. As the examples considered below demonstrate, the form the cottages took varied from place to place, as did the working and living conditions of the families that inhabited them.

Many handloom weavers’ cottages with upper-storey loom shops were built in Lancashire, mainly in the eastern parts of the county. Much more numerous, though, were those with ground floor loom shops. The two examples shown here are at Livesey, near Blackburn. Rows of windows with three openings, probably with central mullions removed, reveal the location the loom shops. The cottages were larger than most working-class dwellings of the period, having space for four dedicated bedrooms. They had four chimney pots, two at end, indicating the position of the fireplaces. The front doorways with keystone arches add architectural interest.

That cottages of this type were used for handloom weaving is verified by drawings contained in an account book compiled by James Brandwood, a steward at Turton Tower, near Bolton, during 1790s and early 1800s. As can be seen, the loom shop occupied about half the ground floor area and it could only be accessed from inside the house. It had six-light, mullioned windows at front and back; a fireplace; and space for four looms, two by each window. The remainder of the ground floor space was taken up by the ‘house’, which also had a fireplace. Functioning as a living room/kitchen, the house would have provided a focal point for family life, but would have offered little privacy for family members.

In other cases, alterations can be much more difficult to discern, as with the two cottages shown to the right. They are located at Bog Height Road, Darwen. Their frontages are very similar, but, as the white arrows reveal, one of them displays two lintels and a sill at the side of its downstairs window. The clear indications are that a row of three windows would have originally lit a loom shop. So, the two cottages would have been built as a single handloom weavers’ cottage, similar in appearance to those at Livesey. Once handloom weaving ceased, the cottage was large enough to be converted into two, single-fronted dwellings, each with four rooms.

The cottages shown to the left are in Paradise Street, Macclesfield, Cheshire. Brick-built, they are single-fronted and have three storeys. The uppermost rooms were used as loom shops for weaving silk. Each has a horizontally-sliding sash window that was large enough to enable good natural lighting to be obtained internally. There are similar windows at the rear, Domestic accommodation comprised two downstairs living rooms and two bedrooms above, the upper parts of the doors and windows being formed from brick arches. The chimney stacks originally contained four chimney pots and it may be that the four flues they serviced led from fireplaces in the living rooms. 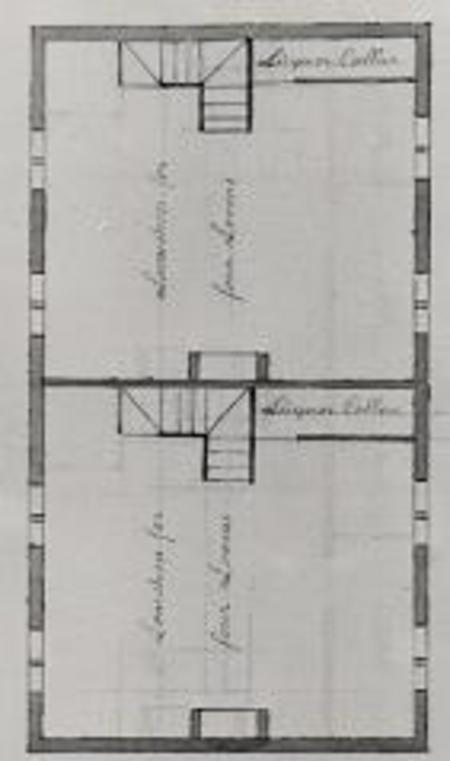 Further documentary evidence that rows of cottages of the types shown above were used for handloom weaving can be found in mid-Victorian census schedules. The example shown is taken from the 1851 census for Salesbury, in the Ribble Valley. Whilst cotton handloom weaving had greatly declined by this time, especially as large numbers of improved power looms were installed in urban mills during the major trade-cycle upturn of the mid-1840s, the trade has by no means been superseded. In rural areas particularly, families continued to derive their income from weaving cotton cloths, often the finer and fancier grades, which power looms wove less well. And young teenagers were still entering the trade. Piece rates for hand weavers had fallen greatly during preceding decades, but individual earnings might still provide enough income to meet at least the basic family expenses. 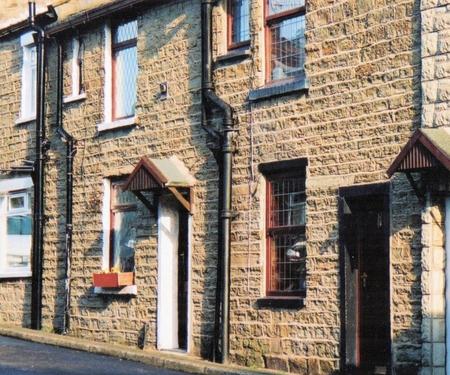 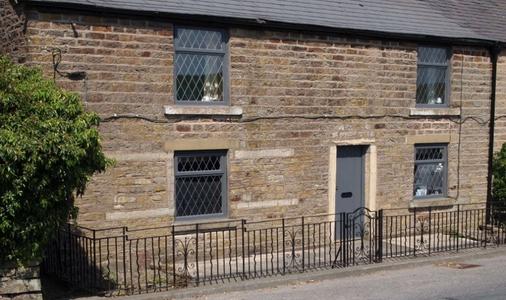