But what of the 1623 population crisis? Although much smaller in scale than that of the late 1720s, this crisis has received a good deal of consideration from historians. The consensus is that, given high food prices resulting from several harvest failures, along with depression in wool textile production, starvation was the primary cause. Yet uncertainties remain, including the finding that, as in the late 1720s, the crisis did not have its maximum impact during the winter months. But perhaps by then, at least for the time being, a balance between numbers of people and available food supplies had been restored. With fewer mouths to feed, families could avoid starvation.

Other insights into the nature and causes of population crises can be obtained by examining the baptism figures for the crisis years. At Manchester in the late 1720s sharp falls occurred compared with the usual numbers earlier in the decade. And in 1623, a much-reduced level of baptisms arose compared with annual numbers across a sample of parishes during the preceding decade. One concern here is that any undernourishment of young women might inhibit ovulation and hence their ability to conceive. Age-related deaths can also enter into the account, assuming that those recorded in burial registers as son, daughter or child of…, were not usually adults. In 1623, for example, sample data from the county showed that 35 per cent of burials were of children, compared with an average of 44 per cent during the 1610s and 1620s. Perhaps children were being sheltered from the food shortages that are thought to have occurred.

The discussion so far has centred on so-called aggregative analysis. Essentially, this technique involves making annual and monthly counts of vital events recorded in parish registers and drawing interpretations from them. Evidence from other sources, including contemporary comments, can be incorporated in seeking explanation. Much can be learned as a result. An alternative approach, but one that is far more time consuming, is to undertake a family reconstitution exercise. The aim here is to recreate the vital life experiences of a sample group of families. So, by comparing individual baptism and burial entries in a parish register, insights can be obtained into such matters as infant mortality levels and whether whole families rather than individual members were affected during crisis years.

Counting annual and monthly totals of baptisms and burials listed in parish registers can prove highly revealing about local population changes. They do not give a complete picture of the amount of change that occurred from one year to the next, because they take no account of the people moving away from a parish and others moving into it. And monthly gaps in the entries, especially when they do not normally occur in a register, can indicate a degree of under-recording. Yet trying to measure the impact of local population crises, and to explain why they arose, can prove to be a fascinating and rewarding type of investigation to undertake. The results obtained are all too revealing about the dreadful levels of human suffering that past generations could experience as disease and famine periodically struck their communities.

MORTALITY CRISES IN THE PAST: SOME LANCASHIRE INSIGHTS

The recent outbreak of a novel coronavirus serves as a reminder that periods of exceptional high mortality – commonly termed mortality crises - have all too often occurred in the past. In some cases, pandemics have resulted. In others, the impact has been confined to national, regional or local levels, but with marked variation occurring from one place to another. In investigating these crises, historians have relied strongly on parish register evidence, identifying years in which burial numbers were well above the norm. The following discussion briefly considers two examples that occurred in Lancashire, focusing on their severity and possible explanations of their causes.

​
The first example is revealed in counts of annual burial totals for the 1620s. Those made from the registers of Manchester Collegiate church are shown below. As can be seen, an abnormally high number of burials occurred in 1623; they approached three times the number of baptisms. 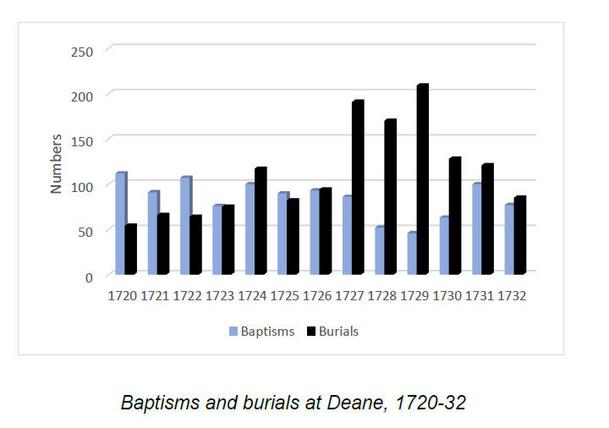 In the three preceding years, baptisms were somewhat higher than burials, though the gap was narrowing. Quite probably the local population was increasing, unless some people moved elsewhere. During the next two years, however, burials were higher than baptisms, so that the size of the population was likely to have fallen, probably quite significantly. Recovery is evident over the next four years until another check occurred in 1629.

The second example shows baptisms and burials recorded at St. Mary the Virgin’s church at Deane, near Bolton, during the 1720s and early 1730s. It differs from the 1623 Manchester example in that burials showed much higher levels than was normal for three years rather than for a single year; that the crises had been building up for several years before the peaks occurred; and it declined only gradually from the peak years. The number of baptisms also fell below normal levels, especially in 1728 and 1729. They recovered somewhat thereafter, but remained lower than burials. It is highly likely, therefore, that the local population fell to a considerable extent over the period.

Two main lines of reasoning are used in attempting to explain why population crises arose. One is that an outbreak of some type of disease occurred. The other is that there were severe food shortages, usually as a result of harvest failure, so people starved to death. Both conditions may have applied, though, with people becoming more liable to succumb to disease because they were ill-nourished.

Occasionally, the clergymen compiling the registers gave clues as to why the high mortality arose. For instance, in June 1829, the vicar at Deane, James Rothwell, noted in his register: “Most of these dyed of agues, pluraisy, etc, tho a fever came ye first.” ‘Agues’ meant chills and sweats, 'pluraisy' an inflammation of the lungs. Could he have been referring to influenza? In another note he wrote that: “ ... in some respects ye disorder resembled ye Plague and continued amongst us above two years”. Some diseases, such as bubonic plague and cholera, can cause very sudden and steep rises in mortality levels, but neither can explain the catastrophe at Deane, since bubonic plague disappeared in England during the 17th century, and cholera did not reach Britain until the 19th century.

In fact, the population crisis of the late 1720s was widely spread in Britain, though varying in intensity between localities. Contemporaries commented on severe outbreaks of disease, mentioning 'suffocating cough', catarrh, 'inflammatory fevers' (any of which might be the result of 'flu) and whooping cough. But they also remarked on a poor harvest in 1728, which may have impacted through high prices on the amount of food people could afford to buy. Inadequate nutrition as well as disease may have contributed to the crisis, therefore.

Further insights into the probable causes of population crises arise from compiling monthly totals of burials for the crisis years. The chart below shows those at Deane church. As can be seen, the first sharp rise occurred in August 1727. But lower levels were recorded from the closing months of the year, when food shortages would have been expected to have arisen. Even lower numbers were recorded from January to July. More or less the same pattern was repeated over the next two years, but with the burial peaks being lower and occurring in September. So, these figures lend more support to disease rather than starvation being the cause of the crisis.